The company was founded in 1963 by James Christopher Balls, Jim to all who know him, when he became the owner/operator of a JCB3 machine. Two years later in 1965 he bought a second machine and employed his first operative.

Over the following years the company grew in size resulting in larger premises being purchased in 1978. Further expansion led to the purchase of the old railway yard in Ambergate in 1983 which is still home to plant and lorry maintenance operations. In 2021 we purchased new offices which will be our base for the future development of the business over the coming years.

From the initial plant hire business that Jim established he started to branch out into contract earthworks of varying sizes. This in turn resulted in the company expanding into transport and haulage., with the purchase of a low loader to move plant around and tipper lorries to move the muck around.

By the late 1990s materials’ recycling was beginning to become established within the industry. This led to the company looking for land on which to establish its own recycling operation. Land was purchased at Cotes Park Industrial Estate near Alfreton and our recycling operation was established. In 2012 we purchased additional land and invested in a state of the art washing plant enabling us to produce aggregates and sands from seemingly useless soils.

The company employs over 100 people and operates a fleet of over 50 machines and 30 lorries. With a skilled workforce to match this makes JC Balls & Sons the Number 1 plant hire and contracting business in the East Midlands. 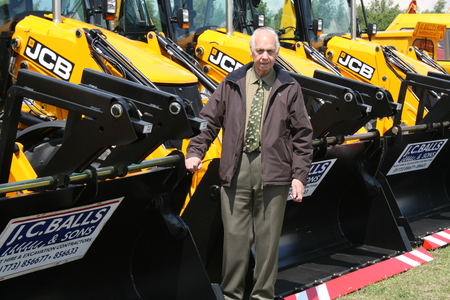